The Swedish Hockey League (SHL) has continued and like many other sporting events, it’s being played without an audience. This doesn’t just dampen the fantastic atmosphere but it is also having a financial effect on the clubs...

That is why the head sponsor Betsson, together with SHL, has launched the ‘Supporter Auction’ initiative. Several unique collectibles are available on the online auction site Tradera and all the money will go to the clubs. 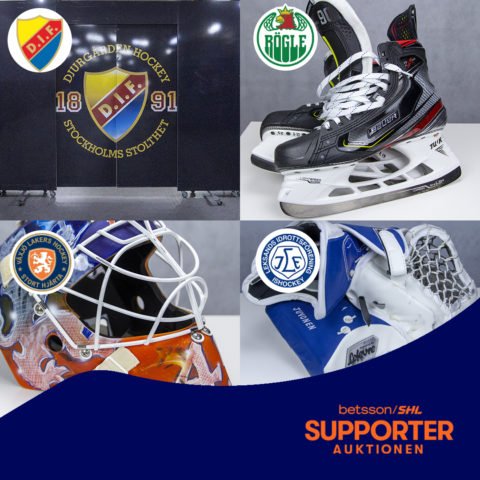 You can now bid on a gigantic “players entrance position” from one of Sweden’s biggest hockey clubs, more than 40 signed jerseys, or even part of a concrete slab from the arena. With no revenue from the live audience, the SHL clubs have started auctioning unique memorabilia for all supporters to bid on. Approx. 100 items will be auctioned on Tradera as a way to enable supporters to back their team in this special way.

The initiative also encourages supporters and former players to join and look for any old treasures they may have that can be put up for the auction.

“We have been the head sponsor of SHL since 2018 and even though we continue as usual in many ways, it is impossible to ignore the fact that perhaps the most important ingredient is missing. In the wake of covid-19 and the fact that the clubs in the SHL now play with greatly reduced audiences, we feel that our role as a sponsor is more important than ever. That is why we, together with SHL, have created the Supporter Auction initiative. Partly to raise money for each club, partly to enable supporters to get their hands on unique hockey gems, but also to increase the engagement in Swedish ice hockey during these challenging times,” says Robin Olenius, PR manager at Betsson.