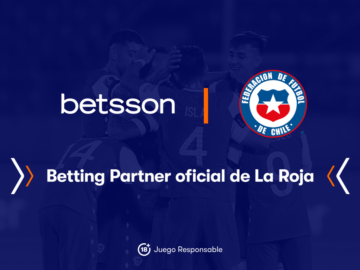 The alliance with the Chilean National Team will last until December of 2022 which means that Betsson will accompany La Roja throughout its qualifying journey for the FIFA World Cup Qatar 2022. For Betsson, the Chilean national team represents an outstanding brand not only on a sports level but also as a strong social element.

Therefore, this new sponsorship aims to increase the scope of both brands and foster a closer connection between the fans and Betsson, generating growth opportunities for both La Roja and Betsson.

For the Chilean National Team, Betsson is considered a prominent international brand positioned as one of the leaders in terms of online entertainment – a trend that has been increasing in the country.

“The passion that the Chileans have for football is one of the strongest we’ve seen in Latin America. Through this partnership with the Chile National Football Team we want to add value to the football fans in the country, support the National Team in Copa America and be part of the exciting World Cup journey and share the hope to see Chile qualify for their tenth appearance in the World Cup tournament,” said Andrea Rossi, Commercial Director Latin America at Betsson.

Similarly, Sebastián Iturriaga, Marketing Manager at the Chilean Football Federation, stated that “we are very happy to have Betsson as the new digital sponsor of La Roja. It is a company with a great presence in sports worldwide and with significant growth in recent years. Undoubtedly this alliance will be beneficial for both parties.”