STARCASINÒ SPORT IS THE NEW US SALERNITANA PREMIUM PARTNER 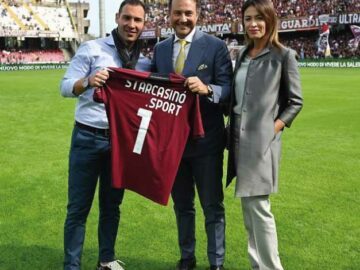 Milan, 13 October 2022 – StarCasinò Sport is now the Premium Partner of US Salernitana football club. The official partnership was announced by Stefano Tino, Managing Director of StarCasinò Sport and Danilo Iervolino, President of the Club. To celebrate this new alliance, the sports infotainment website published a video narrating the inseparable bond that exists between the city and the team.

The stars of the video clip are the Salernitana fans that, interviewed by the comic trio Villa Perbene and actress and TV presenter, Anna Maria Baccaro, open their hearts recounting their devotion to The Garnets. The words of the supporters are the magic ingredient stealing the show, as they express the pure emotion and limitless love they have for the City’s team. Deeply and visibly moved and with goosebumps, numerous fans describe their bond with the club as “a religion”, “a family” or “an immense love”. It is precisely this sentiment that marks and sets the Club apart on the national sporting scene: its special connection with supporters and the local area, one of a kind for zeal and passion.

This was the launching pad for StarCasinò Sport’s project that, though this new relationship, wanted to bring supporters even closer to the Club, making them the key players and recipients of exclusive experiences with “The new way to experience US Salernitana”. Thanks to contests and prize competitions, supporters can win Salernitana branded merchandise and tickets for the Arechi stadium.

“As a guy from Salerno, I feel really honoured to be part of this new partnership; it’s something I really wanted and finally we were able to make it a reality. I’ve been a Garnet supporter since childhood and for me, this is a dream come true to be part of the Club’s future projects. My job meant that I couldn’t follow Salernitana first hand at home, but I’ve never missed a game, not even when there was a time zone difference and I had to get up at 6 in the morning to watch a match”, Stefano Tino, Managing Director of StarCasinò Sport, commented. “Salernitana F.C. is not just a football team, but a great family. What we watch on Sundays at the Arechi stadium is only a small part of the passion that inspires Salernitana supporters. You can feel the loyalty to the team around the city, experience it in the streets, perceive it as something unique. Our desire is to enhance all this, by giving supporters unique experiences, under The Garnet brand colours. I am certain that this is the start of a long and powerful relationship.”

“We are indeed extremely happy and enthusiastic about the partnership sealed with StarCasinò Sport”, Maurizio Milan, CEO of US Salernitana, added. “Thanks to this agreement, our supporters will have the opportunity of experiencing the world of US Salernitana in a fun and immersive way, with numerous and exclusive events for Garnet supporters only.”

StarCasinò Sport is the sports entertainment website, featuring exclusive content created by prime movers for sports enthusiasts. On http://starcasino.sport, the latest news, videos and curiosities about all sports are available, plus the hottest gossip and grapevine news, with the possibility of winning exclusive experiences and rich prizes. StarCasinò Sport is Official Partner of AC Milan, Premium Partner of AS Rome, Top Partner of FC Turin, Official Infotainment Partner of US Sassuolo, Premium Partner of US Salernitana and Palermo FC.