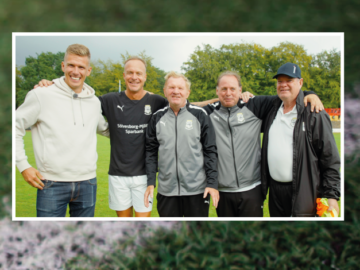 With over nine million views, the hockey web-series Fimpens Resa “Fimpen’s Journey” has been a huge success for Betsson Sweden. The operator has today more subscribers on YouTube than the entire Swedish gambling industry combined. Now, Betsson launching a brand-new football series with its own ambassador, the former footballer, Pontus Wernbloom. In the new YouTube-series “Wernbloom’s Journey”, Pontus visits lower league-clubs around Sweden, trying to find the pure joy of football again.

Pontus Wernbloom ended his career in IFK Gothenburg in the summer of 2021, after playing in clubs such as AZ Alkmaar (the Netherlands), CSKA Moscow (Russia) and PAOK (Greece). After all the success, Pontus announced that his professional football career was often shadowed by anxiety which took away some of the fun from playing matches.

That became the starting point for the new web series, in which Pontus visits profiles such as Kenny Pavey, Marcus Ekenberg and Daniel Bernhardsson – football players who have, one way or another, continued being involved in football – but in the lower divisions.

The world-famous referee and the Dragon’s Den profile Jonas Eriksson, the Swedish journalist Patrik Ekwall and the pod-mate and former IFK Gothenburg player Tobias Hysén also participate in the series.

Betsson’s other ambassador, the former SHL player Christian “Fimpen” Eklund, got a new career as a YouTube star when the series “Fimpen’s Journey” was launched by Betsson almost four years ago. The series has, at the time of writing, over 9.5 million views.

“The mantra is the same – we only produce stuff we really love to watch ourselves, and just like “Fimpens Journey”, we continue to go against the grain and make episodes over 20 minutes long. Pontus Wernbloom is just as wonderful behind the camera as in front of it, and we are happy to be able to give a little more of Pontus to the Swedish people,” says Robin Olenius, PR manager at Betsson Sweden.

The series is produced together with MedVän.